This article assumes that you’ve been watching Star Trek: Picard, at least up until Episode 9. If you have not, please turn around now. There are Picard spoilers ahead!

That last episode of Picard was an intense ride, and while it helped close the loop on a few threads, it also brought up a new question — who will the golum be?

While Agnes was touring some of the labs on the Android planet, Coppelius, she saw something interesting. A shell of a humanoid form, waiting for a “brain,” which they called a “golum.” Agnes was getting a quick tour from Dr. Altan Soong, one of Dr. Noonien Soong’s sons. Noonien Soong is the creator of Data, Lore, B4, and is essentially the godfather to all Androids who live on Coppelius.

NOTE: When I saw the chamber that this “golum” was laying in, I immediately thought that this was the new version of Planet Genesis — the way to bring back a beloved character. Roddenberry wrote Picard as a mature Kirk, and Data was Picard’s Spock. But unlike Spock, Data wanted to be more human, not less.

Agnes asked if Altan had figured out mind transfer, and he said that he had not yet. Altan said that he was not the one to do it. Instead, it should have been Bruce Maddox (but he was now dead, thanks to Agnes in The Impossible Box episode).

Could the show be setting us up for a new form for an older character? Some have speculated that it will be Picard himself who will undergo the mind transfer into this new Android body.

I think that would be a crazy thing to do. As muck as CBS has endured for simply changing small parts of canon or for boldly updating ship design and uniforms, recasting Sir Patrick Stewart at this time would be an unthinkable move. But, they might. After all, they recast the iconic role of Captain James T. Kirk, so why not Picard?

Actually… they did recast Picard once. Sort of.

What I think will happen instead, is that the producers will bring back Data, Picard’s loyal companion. And I think that Alex Diehl (the same actor who played F8 in Episode 2) will be the new Data. Here’s why:

Shortly after Diehl was cast in Star Trek: Picard, he began posting on Instagram cryptic messages, including that he had been cast in the “role of a lifetime” and that his “dreams had come true.” You don’t post like that if you’re playing an Android that kills everyone on Mars.

And then there’s this:

Alex teased back in January that there would be another synth with his bone structure on the show soon. Note that we only see the BONES of the golum, not his face.

We think that Diehl’s role of a lifetime will be a new form of Data, who will somehow inhabit the golum that Altan Soon showed off in Episode 9. Spiner will join the show as a semi-regular, therefore letting him releasing his hold on the character.

We think that at the end of Episode 10, you will see a new synth, played by Alex Diehl, which will be brought to life by Soon and Jurati, and will have the brain and soul of Lt. Commander Data.

Star Trek: Picard airs on Thursdays in the United States on CBS All Access.

Why did Enterprise get such a lousy ending? We now know… 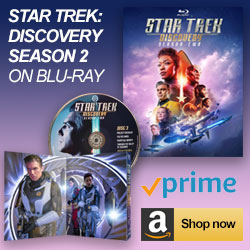