The second episode of the new series (released the show after an encounter with an alien creature that must have salt — and she will kill to get it) featured another exploration of a unique individual versus the crew of the Enterprise. It will not be the last time in which the crew of the Enterprise must face a life form that operates outside of the rules of humanoids. 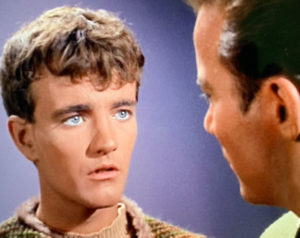 The story begins with the ship pulling alongside the cargo ship Antares, and their commander, Captain Ramart and navigator, Tom Ellis beam aboard. They are accompanying a young passenger, named Charles Evans. The young man was catching a ride with the Enterprise on his way to Colony Alpha 5, which is where his relatives are. We learn later that Charlie was the sole survivor of a transport crash 14 years ago, and he was alone from age 3.

It is unclear if the Antares is part of Starfleet, as the insignia on Ramart and Ellis are not the usual golden delta. Meanwhile, Kirk wears his greenish wraparound tunic for the start of the mission.

Kirk greeted the three in the transporter room, and Charlie displayed an unusual ability to manipulate the crewmen of the Antares… as he rolled his eyes, Ramart and Ellis could not stop praising the young passenger. Kirk does now seem to catch this trick.

The captain assigns Yeoman Rand to escort Mr. Evans to his quarters. Charlie seems to have never met a female before because he is dumbstruck when she speaks to him. Charlie turns to Kirk to ask if this is “a girl.” Interesting that the young Charlie has the intergalactic womanizer himself to help him understand what a woman is. Ha!

Interesting that the young Charlie has the intergalactic womanizer himself to help him understand what a woman is.

While under examination in sickbay, things get a bit awkward between Charlie and McCoy. Evans asks McCoy if he “likes” him. McCoy responds that he did. Charlie reported that the crew of the Antares did not care for him and that he was trying hard to make people like him.

Charlie observes one crewman slap the other on the butt and remembers that move when he sees Yeoman Rand later. He offers her a gift which happens to be her favorite. She must run as she’s on duty. But Charlie gives her a whack on her bottom, which she does not approve of. She instructs him to tell the captain what he did and why it was a bad idea.

On the bridge, Kirk notes that Charlie is having trouble with adolescent issues. Spock then asks McCoy if Charlie mentioned the Thasians while in sickbay. The Thasians, who were thought to be an extinct species, must have been around to assist Charlie in survival, as he was alone, the Vulcan argued. McCoy argued that Charlie could have survived from fruits and other native plants on the planet. This disagreement would eventually cause Spock to charge that McCoy was speaking emotionally and not scientifically. One of the many disputes that they would have through the series and later films.

Later in one of the recreational lounges, Spock and Uhura teamed up on an impromptu musical number. Charlie enters, and Uhura changes her lyrics to be about Evans, which embarrasses the young man. Charlie then uses his powers to choke Uhura. Charlie then entertains all in the lounge with some playing card tricks, which clearly infringe on the known laws of physics.

Members of the Enterprise’s crew enjoy a song performed live by Mr. Spock and Lt. Uhura. Courtesy of CBS / Paramount

Charlie asked Kirk to explain why it was not a good thing when he slapped Yeoman Rand. Kirk sputtered and was not able to come up with a satisfactory reason, and Charlie was left confused. Kirk was then interrupted by a call from the bridge. It turns out Captain Ramart from the Antares was calling to speak to Kirk. As soon as Ramart started to transmit, his transmission was stopped. “It wasn’t very well constructed,” Charlie said. Kirk turned to Charlie and asked if he thought something happened to the Antares. Spock detected debris on the scanners, which he determined was all that was left of the Antares.

Strangely, the mess hall contacted Kirk moments later to report that the meatloaf in the ovens had turned into real turkeys. Charlie stifled a laugh and walked into the turbolift.

Later, as Kirk and Spock played chess, Spock poses that Charlie is somehow responsible for the destruction of the Antares. Kirk then leaves the room as Charlie enters, who then engages Mr. Spock in a game. Spock crushes Charlie after just three moves. But then Charlie uses his powers to melt the chess pieces.

After that, Charlie runs into Rand, who attempts to introduce him to a younger crewman, Tina Lawton, Yeoman Third Class. Rand wanted to introduce him to someone his own age. Charlie does not accept this switch attempt and tells Rand that he does not want a girl, he wants to be with Rand. Charlie tells her that when he is around her, he feels “hungry all over.” Rand looks puzzled and a bit disturbed.

To help Charlie, Kirk then takes his shirt off and shows the young man some fighting techniques in the gym. Kirk shows Charlie a wrestling throw on a crewman, Sam. Then Kirk throws Charlie in the same way… but when Charlie is thrown, Sam laughs. Charlie then makes Sam vanish with his powers. “It’s not nice to laugh at people,” Charlie said. Kirk asks where Sam is, and Charlie replied simply that Sam is “gone.” Kirk summons security, who Charlie pushes back with the power of his mind. He also makes a phaser disappear. Kirk then bluffs and tells Charlie that if he does not go to his quarters, then the captain will be forced to carry him there.

Uhura then reports that all phasers have disappeared from the entire ship.

In the briefing room, Spock speculates that Charlie is a Thasian, who, according to legend, can use their powers to phase items out of existence. McCoy disagrees, citing the human physiology, which makes up Charlie’s body. Kirk then decides that they cannot take him to the colony as he might destroy the entire place and all inhabitants. Kirk summoned Charlie and asked him if he was responsible for destroying the Antares. Charlie said that he was.

Kirk then decides that they are not going to take Charlie to the colony. As this order is given, Uhura’s station explodes, and navigation no longer can enter instructions into their instruments. Just then, Charlie appears on the bridge and forces Spock to recite poetry. Charlie tells Kirk that they cannot change course and that he must get to Colony 5 as soon as possible.

Kirk then forces Charlie to release control over Spock. He then leaves the bridge and turns Yeoman Lawton into an iguana on his way to see Rand. He bursts into Rand’s cabin, and she tells him to not enter her room without knocking. He then says her never to lock the door again. He then tells her that she wants “her.” Spock and Kirk respond to the scene as Charlie starts to get aggressive. Rand slaps Charlie, and he blinks her out of existence.

“Why did she do that?” Charlie asks. He turns to Kirk and Spock, who he then tells, he still needs Kirk, because he needs Kirk to run the Enterprise. But Spock’s legs are broken. Kirk orders Charlie to let Spock go as well, which he does. Kirk then asks about Rand, but Charlie refuses to tell him where she is.

Kirk then escorts Charlie to a room with a force field protecting the door. To retaliate, Charlie removed the entire wall from the cell with his powers. Then Charlie goes from level to level wreaking havoc among the crew. Charlie then takes over control of the ship directly.

Kirk speculates that he might be vulnerable since he’s now running the ship entirely. His powers might be at their maximum, he supposes. Kirk attacks him physically, which allows the crew to regain control of the ship. Suddenly, Rand reappears, and Uhura reports an object off the ship’s bow.

A Thasian being appears on the bridge… a hologram of an old human’s face. The being returned all Enterprise crew to their former states. Charlie grovels and pleads with Kirk to let him stay with humanity. The being agrees to take Charlie from the Enterprise.

This episode moves quickly and is paced well, but I am not sure if it’s just me, but the story is “old.” We’ve seen the young person rebel against their parents, which is essentially what this is.

Also, I found it a bit strange that the producers chose another fantastic being to be the subject of this second episode, rather than something more “science-y.” We have no scientific explanation for the powers behind the Thasians or where they have been or … anything. I also noted that the writer seems to have not decided exactly what they wanted the Antares to be.

At the start, the Antares is a “cargo ship;” later it’s a “science probe vessel,” and later still, the Antares is a “survey ship.” Perhaps it was all of these things — a particular class of Starfleet ships that can do it all. In the end, this episode was enjoyable and had a lot of highlights, most notably the friction between Spock and McCoy and Uhura’s singing.