After months and months of speculation — promises from both the cast and crew — we now know when Star Trek: Discovery’s third season will be released. On October 15, we’ll all get to finally see what happened to Michael Burnham and her crew.

We’ve been lucky enough to talk with several people within the creative team that brings Discovery to life, including the great Doug Jones, who plays Saru, film editor Chad Rubel, and more. They’ve all said that this third season will be a wild ride, and will answer questions that were left lingering in last season’s finale.

During last week’s [email protected] event, some of the stars of Discovery made a few remarks that might be considered insights into what could happen in Season 3. Mary Wiseman answered a few questions about Tilly’s yearning to be a captain, which we’ve been hearing about since “Context is For Kings” (Disco’s third episode).

Doug Jones also mentioned that he could see Saru reuniting with his people, which is close to what he told us a few weeks before that appearance.

One thing that many Trek fans are openly wondering about is if Emperor Georgiou (Michelle Yeoh) will still get her own show. If Georgiou was on the Discovery when the ship followed Michael through the passage to the future, how can she then have new adventures on Star Trek: Section 31?

Georgiou will go back in time

The obvious answer is that Georgiou will find a way to go back to the 23rd Century, especially if Starfleet is in shambles in the far future, where the crew of Discovery finds itself. Then, does this mean that Discovery will also go back with Georgiou?

We’ll have to watch to find out what happens. October 15 is a long way away, but luckily we have Star Trek: Lower Decks starting in little over a week.

Star Trek: Discovery’s third season will begin streaming October 15 on CBS All Access in the U.S.

Updates on Picard: Season 2 from Patrick Stewart and Akiva Goldsman

A look behind the scenes of Star Trek: Discovery with Chad Rubel, Film Editor 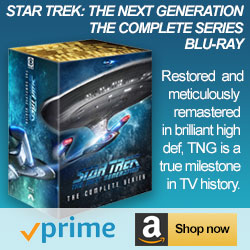